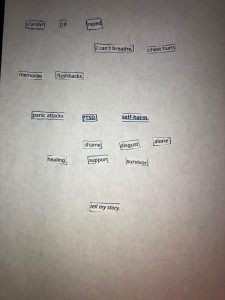 For my found poem, I chose to use an article that a women wrote about her sexual assault and what happened after. Sexual assault is a very big issue that I think needs more attention. In the article, the women, named Carolyn, explains how her life changed and what disorders she fell victim to after her victimization. This happens to way to many people and it happens way too often and I wanted to bring attention to the issue.

In my found poem, I purposely space the first three lines far apart from each other because I want readers to feel the emphasis and impact of what happened. Then I clumped the two last lines together because without support she would never have healed from the disgust and shame she felt. I made sure the poem was short and I made sure I used important words that popped out of the article in order to get the idea of what Carolyn went through across.