Mean is a story told from personal experiences by the author, Myriam Gurba. Since Gurba is seen as “different” from typical society, she is able to tell stories about what is was like growing up being queer and mixed race. I enjoyed some parts of this book because of her use of dark humor. For example, Gurba writes, “blond can be sexy. Blond can be innocent. Blonds get to have more fun. Blonds get to embody duality. Brunettes don’t get this privilege. Brunettes are doomed to ho and hoe” (Gurba, 38). I thought this was funny because of the classic saying, “blondes have more fun”. This saying correlates to how it’s more “beautiful” to be blond and how people with darker hair are to be soon as boring. Gurba pokes fun at this belief by saying brunettes are hoes. It’s funny how some believe hair color relates to one’s inner self.

Gurba also brings in humor when she talks about her experience in gym class. The girls wore “booty shorts” (Gurba, 41) and had to do “humiliating pose(s)” (Gurba, 41). She makes fun of the kids who went too try hard in P.E.     She says, “kids who took p.e seriously took off like kids who took p.e seriously. The rest of us jogged with the intensity of overcooked spaghetti.  Kids who took p.e seriously were assholes” (Gurba, 40). Gurba talking about p.e class attracts readers because of how relatable these situations are. Typically, there is always a split between kids who try hard in gym class and kids who don’t. Between the two groups, there is tension. One group making fun of the other for trying and one group making fun of the other for not trying. It made me laugh and understand what Gurba was saying through her use of humor. She trys to make her experiences relatable for all the different kind of people reading her story. Clearly, not one person has the same experience as another but through her use of humor, she tries to get all the readers to understand each other. She also brings up the first time she was mooned by boys in gym class. The ones who mooned the girls are typical, immauture boys. This allows readers to relate wether they were the immature boy or dealt with immature boys.

Gurba brings up a blond stereotype again in her expeiences. Her friend Ida said to her, “‘I know how you feel…I’m blond. I’m sick of the jokes” (Gurba, 64). Ida is claiming she understands how Gurba feels because of her hair color. Clearly, Gurba has a lot more differences than the people she’s surronded by. Ida tries to pity herself by claiming she knows the feelings of the hatred Gurba has to deal with. Gurba says, “maybe Ida was calling to tell me something dumb. Like that reverse racism was real” (Gurba, 64). I laughed while reading this because there is no such thing as reverse racism and Gurba thinks Ida is stupid enough to think it is real. I think Ida is a symbol of typical, white girls in society. They think that their hair being blond determines who they really are inside. Gurba uses humor to poke fun at these stereotypes of young girls. They’re immature and don’t quite understand the reality of life, yet.

Gurba’s story was interesting to read because of her use of humor. I was able to understand and engage in her story because of how she talked about her experiences. She tried to make light of some situations and make readers laugh. I think the ability to let yourself laugh is crucial in this world. You can’t let horrible experiences ruin your life. I think Gurba tries to add humor so she can sometimes forget about the true horror she has experienced.

Why do you think it’s important for Gurba to add humor into her story?

Did you find any other situtations where Gurba uses humor to lighten up situations? 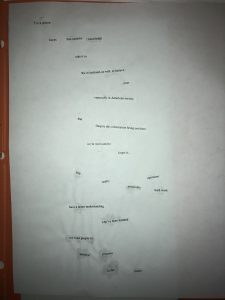 Hi!! I’m Nicole Bendetti and I’m from West Islip, Long Island. I’m a sophomore here and this is my first semester at Cortland. I transferred as a sophomore and i completed my first year of college last year at SUNY Farmingdale. My major is English Secondary education. I really enjoy English and poetry.