Throughout my blog post I want to address how Myriam deals with her rape through an uncensored sexual humor. Throughout the whole book, we get to know Myriam and her dark humor, but what stood out to me in these last chapters was how he she sexualizes certain instants to repress her traumatizing experience. Repression is a common mentality in all people, and the human subconscious works in ways that directs the thought through an outlet other than remembering; in this case it’s Myriam’s outlook the world in a sexualized fashion.

One-way Myriam represses her incident is by perceiving sex as an objective, which devalues the experience in a person’s life. She goes on to say “…so I gave myself a new challenge: to have sex with a married man” (p. 145), which makes the act of sex seem like a task rather than an intimate experience. By using the word “challenge,” Myriam is portraying to the audience that sex isn’t special, and just a goal for people to obtain. I feel that by devaluing sex, she is coping with her rape because the intimacy in sex was stripped away for her. She stops seeing sex as intimate, but as this tool of destruction. Another example of her devaluing sex was her experience with the drama professor. While vividly describing her sexual experience with the man, her mentality isn’t very serious. I believe that most people in this situation wouldn’t be making jokes; in this way Myriam displays that she is numb to being intimate. While in the alley with the man, he asks her “You just been diddled by a Jew. How does it feel,” to which she responds with “kosher,” (p. 149). Before I dissect this example, I want to say that this is my favorite line in the whole book. Not only is her response brilliant, but the situation is just weird. For this guy to say, “diddled by a Jew,” is just plain weird but oddly hysterical. It is kind of one of those lines where the person on the receiving end quietly laughs to themselves, and moves on, but Myriam answers with “kosher.” The reason she can respond in a witty way, while being against a wall in a sexual situation, is because of her lack of intimacy. Even if Myriam altered the situation while writing the book to make it funnier, her choosing to say or add a joke at that moment is her way of showing the reader how little sex means to her. Nevertheless, her use of satire in this situation exemplifies her lack of value in sex due to her traumatizing experience.

Even though Myriam is repressing the memory of her rape, she still gives insight to how it affects her mind. As the reader we travel through Myriam’s life, just to figure out how her trauma dictates her behavior. We analyze her dark humor, her way with people, and investigate her psyche. In these later chapters, she starts to directly connect her behavior to her experience more often than we’ve seen through the rest of the book; one instance really stood out to me. On page 153, Myriam’s use of anaphora really describes how derailed she has become due to the lose of her innocence. The repetition of “chaos” reflects how the memory of her rape is constantly bouncing around her head, as if she feels lost in her own mind. I really liked how Myriam breaks the anaphora with “the haunting.” This solidifies to the reader that her own memory is following her around like a ghost, giving a constant reminder of what happened to her. Nevertheless, Myriam is followed around by her trauma and continues to devalue sex because of her experience.

Do you believe that Myriam uses the devaluing of sex to repress her trauma? What is another example of this in the text, and what significance does it have on the analysis of her behavior? 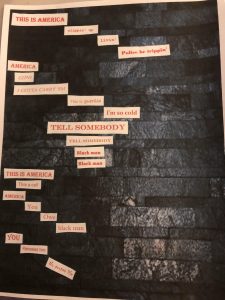 This is America, slippin’ up, livin’, Police be trippin’

America, Guns, I gotta carry ’em, This is guerilla, I’m so cold

This is America, this is a cell

You, kenneled him, no proper life.

The song “This is America” by Childish Gambino is considered one of the most controversial songs of 2018. The music video depicts things like gun violence that made citizens question the levels of equality still in our society today. I put together this poem to remind people of the mistreatment of black citizens throughout our country’s history. I wanted to highlight this problem in our society, as equality is something we still need to strive for. People of all races need to speak up and come together to progress our culture as a whole.

Now to my poem. I put together the poem in a very strategic pattern. For one, the background is very bland and dark. I felt this would be fitting as it creates this very cold undertone on the poem. Also, this isn’t a brick wall where all the bricks are the same size; I used this as it related to the unequal treatment of different citizens in our country. Next I made certain phrases larger than the other words. I did this so it isolates phrases that connect America to the inequalities felt by black citizens. Words like “cold,” “cell, and”kenneling” highlight the idea that black citizens have been isolated and pushed down, repressing them as a whole. Another key factor of the format is how the lines are arrange. First, all of the lines are spaced horizontally with different spaces to exemplify the uneven opportunity that our country had faced. Second, the last line purposely is slanted off. The line “no proper life,” is slanted off to reiterate the idea of inequality. All the other lines are level, but I slanted that last line to grab the reader’s attention and let that idea sit with each individual. Overall, I hope my display of inequality shines a lot the problem that lies in our everyday lives.

The panel of the four professors was so much more than I bargained for. With Professor Daniel Radus as the moderator, the speakers all gave great personal insight into how they teach, without losing the uniqueness of their personalities. It was interesting to see the inner clockworks of how my current and future professors process their jobs. Personally, I had so much fun listening to Professor Jackson. As a video game buff, it was fascinating to me hearing how he incorporated his passion into his work. Just by listening to him speak, I felt engulfed by his tone of voice, and could hear his joy in talking about his work; that is something I hope to accomplish when I start to teach. The concept of unlocking new tasks just like you would unlock levels or gear in a video game is a genius way to make a classroom environment more relatable. I feel that students will accomplish more with that goal in mind to get to the end if the game and makes the work load more fun. Another panelist I loved to listen to was Laura Dunbar. As a musician, with a trained ear, I never realized how much environment sounds can sway a classroom. The way she described her audible and visual cues in a classroom will be something that sticks with me when I one day have my own classroom. Another interesting factor was having Professor Danica Savonick on the panel. Since I have her as a professor, her panel insight helped me recognize the parallels in what she was saying and how she handles herself in the classroom. It was also cool to learn about what she was working on outside of my English 252 course, and how it also drives her lessons in class. Overall the panel was very persuasive and helped me understand what it takes to be an educator. Furthermore, I am glad I went because my learnings from this panel have altered my understanding of how to run a classroom.

Hey all, I’m Kyle Schwager. I’m a sophomore here at SUNY Cortland, and I’m an Adolescent Education major with a concentration in English. I’m from Lindenhurst, Long Island; it’s in Suffolk County for those who are unfamiliar with the Island. If you need to reach out to me in class I’m pretty relaxed so just come up and talk to me!