In this section of the book, Gurba uses ghosts to signify her past that haunts her. On the third line of page 157, Gurba talks about her obsession with wanting to think about Sophia. Gurba shows how single minded the obsession made her by giving each thought its own line as she sought a surrogate for Sophia, and puts the word obsessed in italics to show how much power the need had over her.

After choosing the Black Dahlia murder as a surrogate for Sophia due to the startling similarities it shared with Sophia’s case, Gurba decides to agitate the ghost of the Black Dahlia by stealing dirt from her grave. Subsequent to her stealing the sand, Gurba was now haunted by two ghosts, one she had asked for, and one that she cannot seem to get rid of. Gurba’s solution to her agitated haunting was to throw the dirt she had stolen from her grave into the ocean. Gurba’s final thoughts in this passage is “I wasn’t only trying to get rid of the Dahlia. I was trying to free myself from the other ghost, too” (161). These final thoughts clue the audience in on Gurba’s attempt to free herself from Sophia. Due to the similarities in both cases, Gurba believed that perhaps the Black Dahlia would take Sophia with her…She didn’t.

In a final effort to free herself from the ghost of sophia, Gurba sets out on a pilgrimage with her family to the place of the murder,Oakley Park. While on this pilgrimage with her mother, Gurba finally dresses Sophia who has been haunting her for decades. On page 174, Gurba addresses Sophia by realizing that she is happy to be alive. Gurba then lists individual moments that occur throughout her life that would be otherwise unnoticed and forgotten. Instead Gurba acknowledges them specifically and discusses how she is glad that she can keep listening to right-wing radio for fun.

This realization did not free her of Sophia, however it has allowed her to understand that Sophia lives on through her. The things that she is able to enjoy while she is alive, are ways that Sophia is able to live on and enjoy things through Gurba. To Gurba, the ghost of Sophia represents not only the events that occurred to her, but also the events that occurred to Gurba and her ability with the guilt of being a survivor. However, Gurba understands that she must live her life to its fullest and enjoy being alive in honor of Sophia, who was never given a chance.

What do you think the ghost of Sophia represents?

Gurba has been haunted by these events for her entire life, what do you believe has changed that she is now able to live with the ghosts of her past and not try to free herself of them? 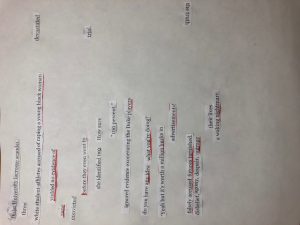 For my found poem, I chose to use an article on the 2006 Duke Lacrosse team scandal. The event occurred when 3 members of the Duke Lacrosse team, were falsely accused of raping a woman whom they had hired to dance at a house party. During this case, the media jumped straight to the conclusion that the three white men were guilty, even though it never even made it to trial. Despite the fact that the three players were found innocent, this did not stop the impact that the scandal had on their lives. Families of the players claim that the three mens’ lives were ruined after this event as no institution, or business wanted anything to do with them. Causing their lives to turn into a harsh struggle despite the fact that the claims were found to be not true.

I titled the poem “Words” because this event showcases the power of words, and what just one person can do with a lie. Words like trial have been put off to the side of the poem replicating what was done in real life. More importantly, the phrase “the truth” has been turned upside-down and tossed to the side as well, also replicating what the media did to the truth in the case. I did not include any of the names of the people involved in the event because of how easy it is for something like this to happen in any other case. Lives can be changed forever simply with words.

Hello, my name is Charlie Buckley, I am a sophomore, and a PRE-Major. I am originally from Springfield New Jersey, where I picked up my favorite sport wrestling. Wrestling has become such a large part of my life that it drew me all the way north from New Jersey to the coldest town on the planet. I enjoy reading, writing, math and science, and look forward to class with all of you.